Edmonton Yacht Club
Dan Sorochan of the Wabamun club was coordinator of Junior Sailing in Northern Alberta for the Canadian Yachting Association, which promoted junior sailing and regattas held in all parts of Canada. Costs were shared by the yacht clubs and the parents on an equalized fee, so that all paid the same amount. Traveling costs were subsidized by the Federal Government. In this way the juniors would see other parts of Canada and get to know other junior sailors. The Prairie Y-Flyer Junior Sail-Off was held at the Pigeon Lake Yacht Club on Saturday, August 7, 1965 and the winners were Robert Lemieux and Mike Roper, EYC John Henderson and John Howard, WYC and Bill Grierson and Don McKenzie, PLYC. These six winners left Edmonton on Aug 15 for London, Ontario to take part in the Pre-Y-Flyer Regatta put on by the Fanshawe Yacht Club. Robert Lemieux and Mike Roper came second in the regatta and all were well entertained. Jim McCoy and John Cameron went to sail in the Enterprise Pre-Centennial Regatta for juniors representing Northern Alberta. 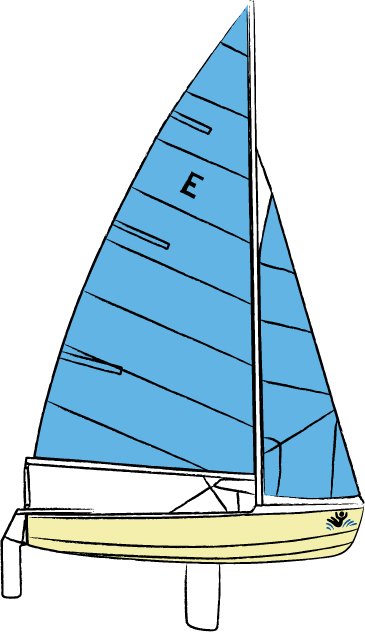 The Edmonton Yacht Club was the host of the sail-off for Flying Junior boats for Alberta and Saskatchewan. On Aug. 13 and 14, 1965, under the direction of Dan Sorochan and Don McKay, the sail-off was held with seven teams competing, including 14 juniors under the age of 15. The sailors were put up at the homes of club members. On Friday the winds were very gusty and juniors had to wait all day, impatiently, for the winds to die down. Finally, a race began at 7:00 pm and the second and last race of the day finished just before sunset. Three races were held on the Saturday. Mrs. Booth and Norm Booth started and finished the races and Ches Roper and Terry McCoy helped with the races on Saturday morning. Two juniors, Jim McCoy and John Cameron, stood by with their powerboat for all the races. The winners were Ray Lemieux and Kelly McCoy from EYC, Cathy Nix and Fred Lemieux, EYC, and Bruce Kendall and Don Lea, from Calgary Yacht Club. They left for Lunenburg, Nova Scotia on Aug. 24 for the F.J. Canadian National Championship Regatta. The social highlight was the visit to the Bluenose II and the banquet put on by the Lunenburg Yacht Club.

The second annual Thanksgiving Regatta was held at the Wabamun Yacht Club on Sunday Oct 10, 1965. Eighteen boats took part and Dan Sorochan hosted Gluhwein and hot turkey dinner for 90 people. The meet was a great success.

The first annual Banquet and Dance for the Wind-up for Edmonton Yacht Club was held at the Royal Glenora Club on Nov. 19, 1965 with a near capacity crowd of 200. Wabamun Yacht Club and Pigeon Lake Yacht Club members attended and Lyall Roper did a masterful job as Master of Ceremonies. The trophy awards were presented for the year. The prestigious Gosling Memorial Challenge Trophy was finally brought back to Edmonton from Calgary by four Y-Flyers from Edmonton, skippered by Gerard Lemieux, Gordon McTavish, Terry McCoy and Robert Lemieux.

The only sad note of the year was the death of Sidney Gosling in December at the age of 76. He had been a member of the Edmonton Yacht Club since 1923.