Wind in the Sails, Chapter Three

After the war, Inter-Lake races were held annually with the Calgary Yacht Club, starting in 1948 at Lake Chestermere and then at Seba. They continued for many years, alternating between the two locations. The races were held on the Labor Day weekend and the big race was for the Hudson's Bay Trophy. They were family outings with square dancing, bonfires, dinners and, of course, sailing. Sailors were put up at the various cottages and the overflow at Hurry Home cabins. Artur Lea, or Pappy Lea as he was called, always came with his sons Spencer and Alf. He was a brother of Roy Lea who sailed at Cooking Lake for the Calgary Yacht Club. 1948 saw the Calgary Yacht Club visiting Lake Wabamun on the Labor Day weekend for the Inter-Lake Regatta. The Lea brothers were very much in evidence, and Ed Lowney was also a worthy opponent. The Hudson Bay Trophy was won by Don Smith and Norman Smith in their dinghy Cough Drop III. In 1949, the Edmonton Yacht Club visited Chestermere Lake. Everyone had a good time and the Lea brothers proved to be the best sailors at the meet.

Races were held off Frank McCarthy's pier and the ladies of the yacht club took over the duties of starting and finishing the races. Betty Ross (Mrs. J.) did it for many years with the help of Margaret McTavish, (Mrs. A.), Isabel Roper, (Mrs. L.) and other ladies whose husbands were sailors. The ladies were very active on the social scene and were also required to sail in the races when the occasion arose. The members were very good at offering their cottages for parties and on occasion dinners were held in the new pavilion put on by the ladies of the yacht club.

Dr. Mcdonald remained Commodore for many years with Sid Gosling serving as Secretary-Treasurer.

At a meeting in 1952, Allan McTavish and Don Bowen moved that a program of handicapping boats be introduced into the races, and Allan McTavish was appointed chairman of the handicapping committee. In 1952 Calgary again visited Seba for the Inter-Lake racing festivities in a very enthusiastic group.

The Edmonton Yacht Club joined the Royal Canadian Yachting Association in 1953. John Ross was the Vice-President of the RCYA for western Canada and held that position for 15 years. His job was to promote memberships in the RCYA and also to visit sailing clubs and get junior sailing started in the yacht clubs. He also donated the John Ross Trophy for junior sailing in 1953. After some years a vice-president was appointed for each province and John Ross served as vice-president for Alberta. The promotion of junior sailing became the most important feature of the RCYA and they instigated competitive sailing for juniors all across Canada.

By 1954, when the Edmonton Yacht Club again hosted the Inter-Lake Regatta and there were many more boats competing, some came from Pigeon Lake, Sylvan Lake and Kapasiwin and there was increased interest in sailing. The regatta became known as the Alberta Provincial Regatta and other yacht clubs became interested in hosting the annual event.

Lyall Roper was Commodore in 1956 when the annual Seba Regatta was held. There were all kinds of water events and land games such as the rolling pin toss, three-legged race and tug-of-war. The yacht club held sailing races. The club was growing and more sailors were competing.

In 1956 a sailor in eastern Canada introduced the Y-Flyer boat, an 18-foot scow. It was fast and had the ability to plane at speeds up to 20 mph. The boats were first introduced to the Edmonton Yacht Club by John Booth, who built 8 boats the first year in his workshop in Edmonton, and George Poole and helpers who made 5 boats the same year. Bill McCoy was one of the first sailors to buy one of the new boats for his sons. The boat really became popular and the next year John Booth built 16 boats which were all sold. Other boats sailed at this time were The Lightning, Enterprize, Cats, Rebels and Toranadoes, and of course the Dinghy. 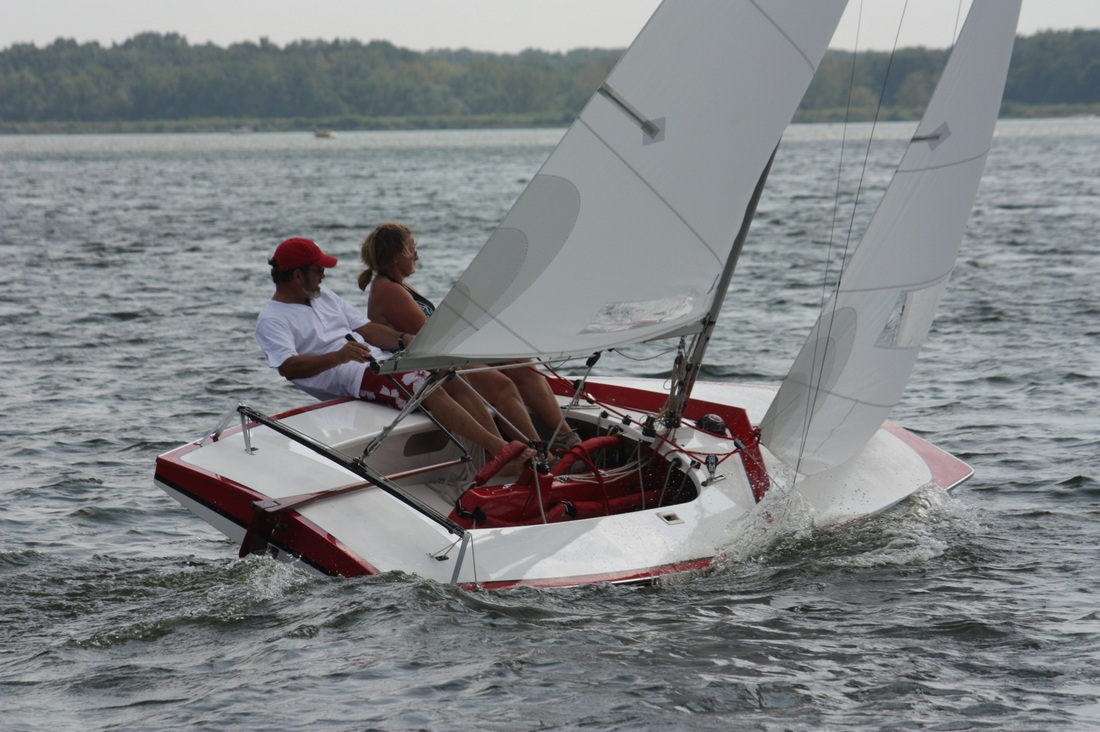 The Calgary Yacht Club usually dominated the racing at the Provincial Regatta but in 1957, at Lake Chestermere, EYC won the cup for team racing.

At the Annual General meeting in April 1958, Allan McTavish was elected Commodore, taking over from Harry Hayter. Fees were set at $15.00 for members, $5.00 for Associates and Juniors, and $25.00 per Family. There were about 25 yacht club members with boats and half of them sailing the Y-Flyers.

The Provincial Regatta was held at Lake Wabamun in 1958 and a beautiful sight it was, with over 50 boats competing. In the team racing there were four Y-Flyers from three yacht clubs: the Calgary Yacht Club, the Edmonton Yacht Club and the Royal Canadian Navy Sailing Association from Kapasiwin. There were three races and the Calgary group headed by Spenny Lea and brother Alf, Jim Aird and H. Klassen edged out the Edmonton Yacht Club team, sailed by Lyall Roper, Gordon McClary, Harry Hayter and John Booth. The Kapasiwin sailors were George Field, Rodney Pike, Dr. Charles Learmonth and J. Anwyll. Alf in the Lea's Y-Flyer, read the tricky winds better than any of the other 50 skippers in the Alberta Open Class to win the Provincial sailing title in the three-leg, nine mile Olympic course. Other winners were Spenny Lea in the Y-Flyer competition, Ed Lowney in the International Dinghy races, J. B. Corbett from RCNSA in his Lightning in the larger boat category, and Dave Jack in a cut down Y-Flyer in the 'Other Class'. The trophies were presented by Commodore Allan McTavish in front of his cottage. The ladies of the yacht club helped with the races and also put on a dinner in the Pavilion for the sailors and their families. The Sailing Committee, under Graham Alvey, was very pleased with this Regatta and thought that sailing in Alberta had arrived. They felt ready to try for international honors.

About this time the yacht club began putting out a newsletter in the summer. The editor was Allan McTavish and he called the newsletter The Windbag.

At the annual meeting held in November 1958, Don Bowen, solicitor, reported that he had obtained registration of the yacht club under the Societies Act. The Articles and Bylaws of the organization were adopted as registered. Sid Gosling was made Honorary Commodore and life member of the Edmonton Yacht Club for his contribution to the club for the previous 35 years. The Edmonton Yacht Club inaugurated the 'Gosling Trophy' for team competition sailing in Alberta.

Sid Gosling was married twice. His second wife was a younger woman, Margaret. They had a child. Sid often said, "I am the only man I know who is collecting the Old Age Pension and the Family Allowance at the same time".

Gordon McClary was elected commodore for 1959. John Ross was presented with the Hudson's Bay Trophy for winning the major individual award for 1958. Also much consideration was given to the possibility of obtaining property on the lake for a clubhouse, and a special committee headed by Harry Hayter was formed to look for suitable property.

In the summer of 1959 Pigeon Lake hosted a regatta on the July 1st weekend. The sailors from the Edmonton Yacht Club won the lion's share of the races. John Ross and John Ross Jr. won top honors. The Pigeon Lake Y-Flyers trophy went to Lyall Roper and Don McKay. Dr.Gordon Bell and Bill Graham were the top sailors from Pigeon Lake.

At this time the Y-Flyer was the most popular boat with the Dinghy still in force but in 1959 a new boat made its appearance.This boat was called the 'Flying Dutchman' and was an Olympic Class boat to sail in the 1960 Olympics in Italy. Seven of these sleek Flying Dutchmen, among the first to be bought in Canada, were purchased by John Ross for members of the Edmonton Yacht Club. The boat was 20' long with a 6' beam and had 160 square feet of sail. The F. D. boats also had a 'trapeze'. This means that the crew could hike out over the side of the boat on a trapeze attached to the top of the mast. By holding the boat on an even keel, all possible wind power could be used. Of course if the wind suddenly changed the crew could be dunked in the lake. This boat promised to be a good competitive class for 1960.

The 1959 Provincial Regatta was held at Lake Chestermere on the Labor Day weekend. Twenty boats went from the three northern yachting clubs. Fourteen boats went from the Edmonton Yacht Club, four from Pigeon Lake and two from the RCNSA at Kapasiwin. The Calgary Yacht Club captured the "Gosling Triphy' for team racing. Four Y-Flyers from each of the main three clubs made up the teams. Terry McCoy in Y-Flyer #287 won the Provincial Open Trophy over the Calgary sailors.

In April 1960 the Annual Sweepstakes on the "Ice off the Lake' was held. Harry Hayter had won the sweepstake in 1959, a racing stop watch, with his prediction of Arpil 27th. He was only one and one-half hours off the correct time of 4 p.m. According to the Windbag 'Dan Smith is the sole authority and from his decision there is no appeal. He tells us that when the ice starts to move and drifts away from the shore to the east of Fallis Point, it never comes back so the ice is 'out' the moment it goes by Fallis Point. Dan judges this fair and square. He doesn't have a guess himself because he's a 'sorta' unofficial honorary member of EYC and he doesn't know who made what guess until it's all over'. If you paid your annual fees before April 25th you would get a chance to guess on the times, date, hour and minute and the winner would get a prize. Harry Hayter was again the winner. He must know something about 'ice'.

Activity was happening in the other yacht clubs too. The Kapasiwin sailors announced that the yacht club had been moved from Moonlight Bay to Richard's Point, just west of Wabamun Power Plant. The new name of the yacht club was 'The Wabamun Sailing Club'. The Pigeon Lake Yacht Club announced their officers for the coming season were
Commodore - Gordon Bell
Vice-Commdore - Roy Cotton
Secretary-Treasurer - Henry Ward
Racing Committee - Joe Healy, Hugh McCall & J. Kettlewell.
Chapter Four