Edmonton Yacht Club
Gerard and Maurice Lemieux represented Alberta in the Olympic Trials in Kingston in July, 1964. They had spent much time during the spring fixing and modifying their Flying Dutchman for the competition. They drove to Kingston and towed the boat with brother Robert as the helper. They did very well, winning one race and finishing third in the trails, but did not qualify for the Olympics.

Six new fiberglass Flying Dutchman boats were bought by Edmonton Yacht Club sailors in the summer of 1964, replacing the wooden ones bought in 1959. The first annual Moonlight Race was held on the September Labor Day weekend. Peter Neil, of the social committee, made the arrangements and the weather cooperated with a beautiful moon and it was an unqualified success. The race was won by Ron Roper and his girlfriend. A social evening was held after the race and made a splendid windup for the season.

Leo Lemieux was seen around the clubhouse late in August with pencil and pad in hand, making drawings for a good sized addition to the front of the clubhouse. Plans were made and a number of the members underwrote the cost through loans. Leo was known for getting things done and the extension was done in the fall and ready for the spring of 1965.

A power boat squadron was formed in the fall under the direction of Art Neilson, who organized a study group and program which would qualify EYC to sponsor a branch of the Canadian Power Squadron. This was expected to attract a number of new shareholders into the yacht club.

The new enlarged clubhouse with a large veranda on the front was greeted with enthusiasm and promised to be much used. Brush in front of the building was cleared to give a better view. Ches and Win Roper again returned to help with the clubhouse and the sailing and great plans were made for the coming summer.

The annual Ice-Out Derby for members who paid fees before the ice cleared was won by Dr. Pat Kimmit.

The sailing committee, following the recommendations of Gerard Lemieux and Paul Kantor, decided to adopt the Olympic Course for racing. This solved the problem of too much congestion at the pier during the race start, caused by the increased number of boats competing. It would also be more more competitive to use the Olympic Course, and the finish of the race would still be near the yacht club.

Dr. Forrester Macdonald, who for so many years was the Commodore of the Edmonton Yacht Club, was made an Honorary Member of the club, in recognition of his services.

Plans were made to have a new and enlarged pier constructed, which was badly needed with more boats and power boats. Under the direction of Bob Swanson, who supplied the lumber, Bill McCoy and Art Neilson made elaborate plans for a pier with adjustable pipe legs for support. Pipe was supplied by Dow and Scott Plumbing. Leo Lemieux had his lumber yard make the sections and paint was supplied by Northern Paint Co. The welding of the supports was done by McCoy Brothers and presto, a new pier 180 feet long. With a "T" in the deep water, painted blue and white, the pier was installed at a work party in June. A sail past was held on Sunday July 4, 1965 with the sailboats and power boats all decorated and Commodore Don McKay and Honorary Commodore Sid Gosling taking the salute at the end of the new pier. Members were also asked to donate any extra lawn chairs they had to the yacht club for extra seating.

The Edmonton Power Squadron was granted their charter and W. Booth, Chief Commander of the Canada Power Squadron, came from Toronto to present the charter. A reception was held at the clubhouse on June 26 and Art Neilson, the first commander of the Edmonton Power Squadron, received the charter. It was a very rainy night but the social was a great success. Steaks were barbecued on a big, new barbecue constructed by Bill McCoy. Allan McTavish supplied the entertainment with the "Unbalanced Four", a barbershop quartet from Edmonton. Music was also supplied by Allan on the piano.

The first Junior Sailing School was held at Seba Beach from July 12 to 23, 1965 under the direction of Terry McCoy and Gordon McTavish. Terry had gone to a seminar in June to qualify for the position. The sailing school stressed water safety, the practice and theory of sailing, use of life jackets, sailing rules, physical fitness and sportsmanship for boys and girls from the ages of 10 to 15. The Flying Junior boats were borrowed from the Boy Scout Camp at Kapasiwin and some from the boat owners on the lake. There were over 40 juniors from Seba and Wabamun who took the course and the juniors gained a lot of sailing knowledge and had a good time.

A new boat from England had made its appearance over the last year, the Fireball. It was slightly smaller than the Y-Flyer and had a more rounded hull. A few had appeared on Lake Wabamun. 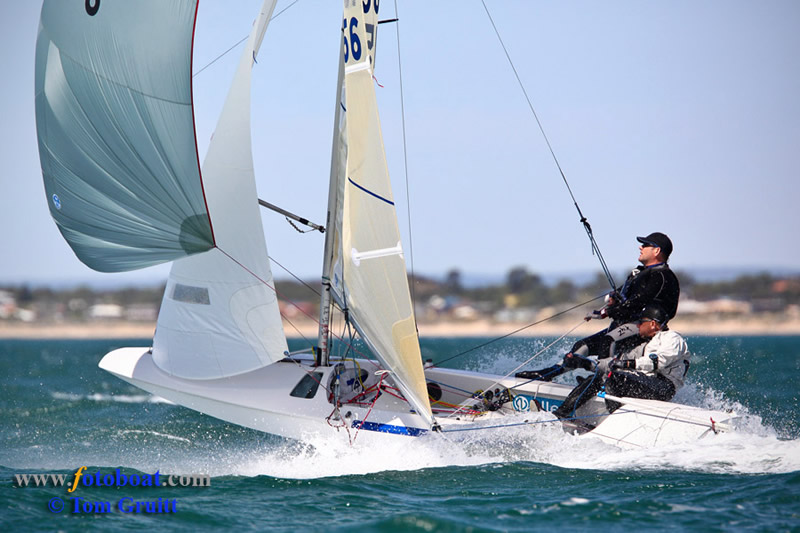 The Alberta Provincial Regatta was held on July 31 and August 1, 1965 at Lake Chestermere with 91 boats competing. A large contingent of Edmonton sailors and their families made the trip to Calgary and practically took over the Highlander Motel. Commodore Frank Ford and Regatta Chairman Jack Hooper and their able committees put on a very good regatta enjoyed by all. The Saturday night reception nearly raised the roof off the clubhouse. The Edmonton group, under the direction of Lyall Roper, wrote and sang some clever verses of sailing songs. This was replied to by Kay Lowney with her words and songs. Bert Linder was in good form and supplied the music and bonfire. A singsong finished off the night for the diehards. John Booth appeared in a bushy beard, Klondike style, and rendered a solo "Henry the Eighth, I Am" at the party. The next morning his Calgary friends managed to shave his luxurious growth and then dunked him in the lake. Needless to say, they all went into the lake too.

The only trophy won by the Edmonton Yacht Club was the Flying Dutchman trophy won by Lyall and Ron Roper. The Y-Flyer Championship, both Junior and Senior, was won by Phil Linder of the Calgary Yacht Club.