Many changes were taking place in the Edmonton Yacht Club executive. There were many more young people becoming involved and they were taking over the running of the club. The seniors who had worked so hard for the club in the 1950's and 1960's were now taking a well deserved rest. Harry Hayter and Al McTavish continued to sail and take an active part.

Raymond and Lawrence Lemieux, and Dave Shaw and Bob Lewis from Calgary, were chosen to go to YOTS (Youth Olympic Training Seminar) for the racing and coaching seminar in June, 1971.

Gerard Lemieux was Commodore for 1971. Dave Grant, Fleet Captain of Sail, was in charge of building a large floating Committee Raft to start races. The cost was $400. He and Harry Treichel did a very good job and the raft was ready for the sailing season. Vince Martin did not sail but he had two boys, Jack and Paul, who sailed; and Vince, with Jim Marshall, took over the operation of the Committee Raft for the sailing season. A starting gun, lapse time clock, course number plates and fixed starting flags were inaugurated and improved the racing procedures.

Cathy Nix was hired again as chief instructor of the sailing school. She was hired for three months and given many more responsibilities such as registrations, mailing, promotion, boat repairs and attendance at junior sailing seminars. She was also in charge of the Western Canada Flyer Junior Regatta, with the help of Maurice Lemieux and Dave Grant.

The National Contender regatta was held in July 1971, with 17 boats competing. The winner of the regatta was a B.C. sailor, Bob Hepworth, who showed the Alberta sailors that the Contender was a popular boat and there was good competition in B.C.

The Alberta Provincial Regatta was held for the first time at the Wabamun Sailing Club on Saturday July 31 and August 1, 1971. Dick Harper was Commodore and Bob Stevens Regatta Chairman. The Wabamun club put on a very successful regatta, with many boats from Seba taking part. A dinner was held on the Saturday night and entertainment and dance followed.

The Western Canada Flying Junior Regatta was held at Seba August 15 to August 20, with a good turnout of juniors and ably hosted by Cathy Nix, Maurice Lemieux and Dave Grant, with the help of members and the very important social committee.

Another new boat had made its appearance in the year 1971, the Laser. This was a Canadian designed boat by Bruce Kirby and Ian Bruce from Performance Sailcraft. The Laser was a one-man boat but smaller than the Finn and had one sail. It promised to be very popular. 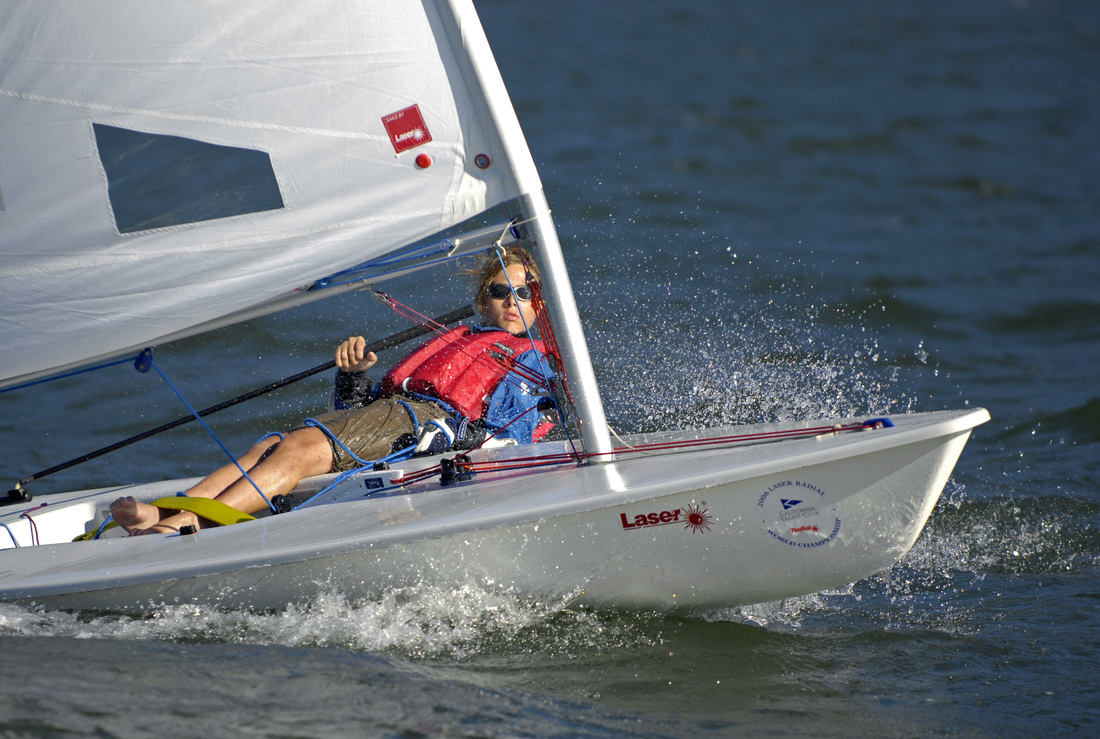 At the annual banquet and awards night in October 1971 awards were given to the following:
Special trophies were given to Vince Martin for his dedication on the committee raft for the summer, and to Jim Marshall for his vigilance in his power boat for all the races.

In the fall of 1971 another new craft made its appearance at Seba Beach. Steve Kovacs of Swim Blue Company in Edmonton had imported Alberta's first six Windsurfers. Ben Cstonyi bought one and brought it out to Seba to try out with Julius Nemeth. However, as they had never seen a Windsurfer in action, they had trouble trying to sail it and finally gave up. In early 1972 a surfer from California came out to Seba Beach and showed them how to sail a windsurfer. This sailcraft became very popular in subsequent years. Some intrepid windsurfers, including Ben Cstonyi, have sailed them in the Down the Lake Races to the other end of the lake.

The big event of the 1972 season was the National Fireball Regatta held on July 1 to 3. Preliminary plans had been made in the summer of 1971 and approved by the board. Final arrangements went ahead in the spring for this big event, under the direction of Commodore Peter Knaak; Fleet Captain of Sail Michel Schneider; and Maurice Lemieux, . Six new picnic tables were bought and Alex Weir Sr. Was hired as club manager and to help with club races when needed.

Good winds were the order of the day when 52 fireballs from all over Canada took part in the regatta on the July 1st weekend. The winds were gusty and many a sailor tasted the chilly water, bit it was a spectacular sight to see a floatilla of yachts racing across the water. A steak barbeque, price $2.00 Adults and $1.50 for children, was held for all members and families, followed by a dance with orchestra and special entertainment. All this was held at the Seba Beach High School to ensure plenty of elbow room for all the people at this festive occasion. The winner of the regatta was Martin Herbert and M. Kelly of Calgary.

The Junior Sailing School was drastically cut down in the summer of 1972 as the Wabamun Sailing Club decided to run their own sailing school. Raymond Lemieux was hired as chief instructor of the sailing school. There were only two junior courses held and both at Seba. Adult courses were held on Saturdays during July, which were well attended.

The Calcutta Night was again very successful and a lot of fun and the Edmonton Yacht Club was able to buy five Flying Junior Sail boats at a cost of $4,500.00. These boats were badly needed and it was felt that the junior program was very important for future members of the yacht club.

The annual awards banquet was held at the Faculty Club on Oct. 14th, 1972 with 88 members attending, followed by a dance.

Over the winter the Alberta Sailing Association had become more organized with a new slate of officers. Maurice Lemieux, Commodore of the Edmonton Yacht Club, was named Youth Co-ordinator for northern Alberta, at a general meeting held in Red Deer on April 8th, 1973. The Dept. Of Alberta Culture, Youth and Recreation, had been approached for grants for the sailing organizations, and money had been granted in 1972 for the expenses of regattas held in Calgary and Edmonton. The sailing school also was changed and came under the Alberta Sailing Association and became The Northern Alberta Sailing College. The chief Instructor was again Raymond Lemieux, which Jack Martin and Larry Lemieux as assistants. Rob and Reid Von Borstall had been chosen by the sailing school to represent Northern Alberta in a Canadian Youth Championship Regatta in Montreal from June 25th to June 29th, 1973. They had proved themselves very good sailors from the competitions from the year before.

The Edmonton Yacht Club had been contacted in the spring by the Y.M.C.A. They wished to participate in the junior sailing program at Seba, in connection with their Camp Keewaydhin at Wabamun. Four courses were held, two (1) week courses for orientation and racing, and two (2) week courses for instruction. Adult courses were also held on the Saturdays and were very successful.

June 1973 was the 50th anniversary of the Edmonton Yacht Club since its inception at Cooking Lake in 1923. Big plans were made for the anniversary party to be held June 30th, 1973. Invitations were sent out by flyer to all the residents of the beach area from Fallis to South Seba. A marquee was set up in the front yard to take care of the overflow and a dance band ëThe Dominosí was hired. There was a good turnout of 132 people. Streamers and balloons decorated the club house and 7 birthday cakes were brought.  Commodore Maurice Lemieux and Frank Oxford, Mayer of Seba Beach, greeted the guests and door prizes and spot prizes were handed out during the dancing. At midnight, sandwiches and coffee were served and Happy Birthday was sung for the cutting of the cakes. The next day a party was held for the children in the Marquee, with games played and sandwiches and birthday cake again served to the children.

Membership for the year 1973 remained about the same with about 60 active members and 25 social members. However, participation in the races was down and plans were made to create more interest. Gerry Hood was in charge of Hurry Inn and put a great deal of time and effort in keeping everything shipshape. There were always repairs to be made and the sewage system had been giving problems for some time and so a new pump-out take and sewer system had to be installed in the spring of 1973, at a cost of $1,400.00

The down the lake race from Wabamun to Seba on Sat. July 14th was won by F. And G. DeGeest in Y978 and a barbeque of steaks and hamburgers followed for nearly 200 people. A cabaret was held following the barbeque with entertainment by Mr. Jack Wallis.

The Edmonton Yacht Club hosted the Alberta Sailing Association Provincial Regatta on Sept. 1st, 1973. Paul Kantor was Regatta Chairman and a wine and cheese party was held for the sailors on the Friday night. Saturday nightís social was chili dinner and a corn roast. As to the regatta itself, I have no details.

Harry Hayter, Honorary Commodore, and longtime sailor at Seba, dies in the spring of 1974. He asked to have his ashes scattered over the lake he loved so much.

Maurice Lemieux was again Commodore of the Edmonton Yacht Club for 1974 and also president of the Alberta Sailing Association. The rosters were put out in a new format, which was cheaper than the old one.

The participation of the Y.M.C.A. Camp Keewaydhin in the Northern Alberta Sailing College had not been a success as not many of the camp juniors enrolled in the sailing classes. Two instruction courses were held under the direction of Raymond Lemieux. Adult classes were held on three successive Saturdays and we well attended.

After an absence of some years, the Seba Beach Regatta was revived on the Civic Holiday weekend on August 3rd, 4th and 5th, 1974. There were land races, a parade and water sports. The yacht club was asked to hold races for the regatta and supply a small trophy for the winner. The winner of the sailing trophy was presented at an awards ceremony to Dr. L Mallett, sailing in Y-|Flyer 1085.

The provincial Junior Youth Regattas were held at Seba on August 10th and 11th, under the direction of Alex Weir and John Henderson, with 34 juniors enrolled. The Edmonton Yacht Club sailors did very well, and the results were: